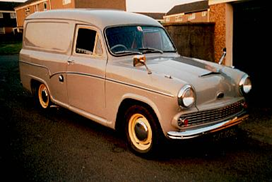 ½ ton van and pick-up was based on the Cambridge body styling and replaced the earlier A40 Somerset style. The A50 engine was used until 1963 when it was replaced by the 1622cc B-Series engine. The Austin badged vehicles were discontinued in 1971. After that they were sold as a Morris.